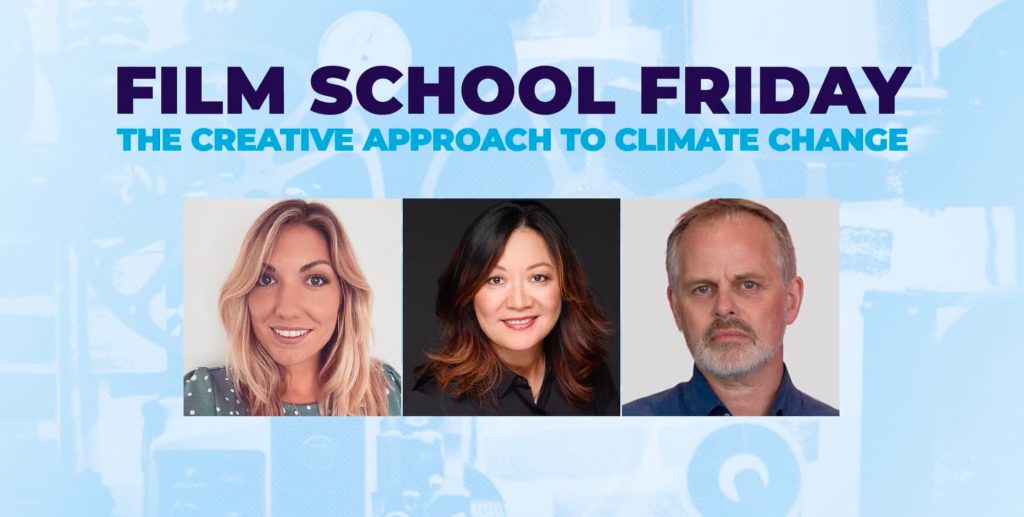 In his blog, MPA EMEA President and Managing Director Stan McCoy writes about how climate change can affect storytelling and how the right story can change behaviors…

As we leave COP26 behind, world leaders, industries and individuals around the world continue to reflect on how we can come to grips with the challenges of climate change and how we can take forward the momentum and the commitments that were made. Of course, the MPA’s member companies will continue to use innovative solutions to promote sustainable practices in their studios, in their offices, and in the communities where they shoot.

But what about another great tool we have available to us as storytellers? Film and television can take audiences many places, they can make them laugh and cry. They can also make them care. They can inspire actions large and small. Narratives help us to create meaning, and right now we need meaning more than ever.

Last week at our Green Film School Friday event we hosted a fantastic debate from real thought leaders including Steve Smith from Picture Zero Productions, Carys Taylor from Albert, also known for their carbon calculator tool pioneered by BAFTA and Janet Vissering from National Geographic about how our industry can inspire action on the climate crisis and push for change.

Our President and Managing Director, Stan McCoy, opened the debate by discussing how at the opening of COP26, UK Prime Minister Boris Johnson invoked the film character James Bond, who is always saving the world against a ticking clock – a theme that features in many films – one hero fighting the ultimate fight to protect the planet, their loved ones and humankind. They might be fantasies, but when it comes to climate change, the reality, as the Prime Minister implied, is that we do need to save the world from climate change. In fact, the relationship between us and our environment is often the essence of storytelling.

Facts alone are not enough to make people aware of climate change.

You need more than statistics, data and charts to get people to listen and understand. And that’s true for climate literacy too – the first step in becoming active participants in the fight against climate change is understanding. We have an opportunity, as creatives and filmmakers, to resonate with people emotionally and create a story that will stay with them and genuinely stir people into recognizing the urgency of the crisis.

That’s why, during our event, Steve Smith, Executive Producer at Picture Zero Productions discussed the need for climate and culture people to come together. Often, he said, climate scientists and policymakers don’t talk to culture people. We need to change the way people think over the next few years and it’s not scientists, but storytellers, who are best placed to do that . That includes galleries, museums and heritage culture, all of which reminds us that the way the world is today isn’t, in fact, the way that it always has been.

How do we tell the right story that will change behaviors?

When you think of climate change films you immediately recall apocalyptic dystopias which paint a picture of a world that warns us of the devastating effects of global warming, ozone depletion and overpopulation. But utopian and dystopian narratives leave viewers stuck between extremes, which can leave us feeling powerless. It is important that we also harness the powerful storytelling available in docu-series like ‘Secrets of the Whales’ from National Geographic and Disney Plus. These stories open our eyes to the magic of the natural world and then inspire us to protect it.

During our event last week, one of our panelists, Director at Albert, Carys Taylor, called for ‘climate empowerment’ instead of ‘climate fatalism’. She argued that there are different things you can achieve with different types of creative content: you can inspire nature lovers’ motivation by showing them the devastating things that are happening to the natural world, and you can normalize different behaviors by embedding them subtly on screen so that it becomes a way of life – for example, through a character plugging in their electric vehicle mid-way through a conversation or switching off the lights as they leave the room. We have a role in helping empower creatives so they know where the high-impact areas are. This way they talk about the kind of stuff that will shift the dial in the right way.

Through both of these genres, there is an opportunity to depict resilience and highlight solutions; to consider how we can make ourselves strong in the face of climate change. How can we flip the script and talk about the jobs, innovation and advanced technologies needed to develop a post-carbon economy?

Carys explained the ‘Subtitles to save the World’ campaign at Albert, an annual report which scrapes subtitling data in the UK and looks at how climate change fares against other random words. This year Albert looked at the solutions mentioned and found that green energy and transport solutions weren’t covered nearly as much as recycling, which – whilst still important – has far less of a impact in terms of greenhouse gases.

One thing we do know is that people who work in film are superbly innovative. Whatever the challenge, they will rise to it.

From storytelling to action.

What we see on screen has the power to move and inspire us. It can bring home the fragility of our natural world and the urgent need for action to safeguard it. We now need to build people’s urgency for climate action by producing a wide variety of stories showing positive action on climate change. Applied at scale, this will help shift the focus away from just consumer action towards community action – we all have a part to play. Through strong storytelling we will translate immediate reactions to content into long-lasting behavioral changes.

In ‘Secrets of the Whales’, Senior Vice President of Development and Production at National Geographic Partners Janet Vissering explained that she likened it to “popcorn and broccoli” – we all consume vast quantities of popcorn at the movies, but Janet’s team are keen also to “sprinkle in the broccoli”, in other words, showing what is really happening. It is essential that we make sure people fall in love with the beauty of the world, whilst also grabbing them to explain what the reality is so that viewers are more open to taking individual action.

At the MPA we believe in the power of film and storytelling – and we believe that power comes with a duty to tell stories that matter. Producers, filmmakers and creators hold a special responsibility to produce stories that inspire conversation and shape societal attitudes.

We know that the film and TV industry must make systemic changes in order to achieve a net zero target by 2050. We have the statistics, we have the will, and we have many of the solutions. But if we want people to act to create long-lasting change, we need creative storytelling in film to truly inspire people.

In case you missed it, you can catch up on the action from the event by watching it here.