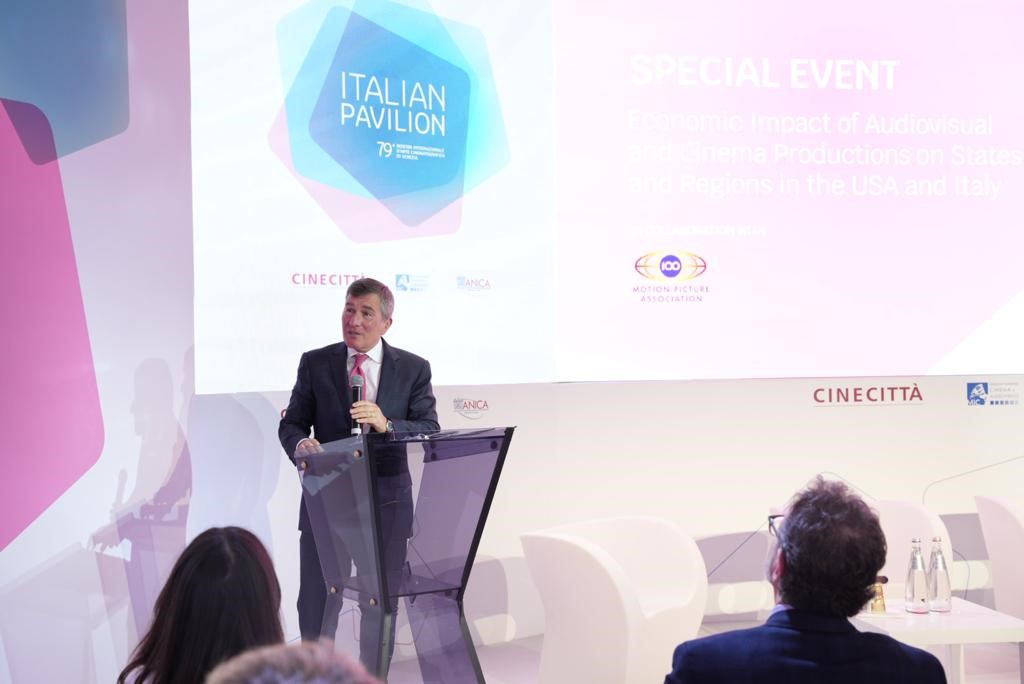 Thank you, Roberto for your kind words and for everything you do to promote this industry, including helping us celebrate the MPA’s 100th birthday here at the Venice Film Festival.

As Roberto mentioned, I’m Charlie Rivkin, Chairman and CEO of the Motion Picture Association, and I am delighted to return to this extraordinary city.

I mean, how appropriate it is to be talking about the business of our industry in the birthplace of modern capitalism and the modern banking system.

For centuries, entrepreneurial merchants, and the first bankers in the world made Venice the most important maritime hub in the global economy.

Every year, a ceremonial ship would be rowed into the Adriatic, where the Doge of Venice would cast a ring into the sea. This so-called Wedding of the Sea symbolized Venice’s connection to the ocean and the economy that flowed in and out of its profitable shores.

Even today, you can still see the bustling business on the Rialto where most of this historic business was conducted. Venetians and restaurateurs still go there for their food shopping.

And once again, we meet on the 79th occasion of the Venice Film Festival where the excitement, the regalia, and the business of our industry thrives once again.

I am very happy to see so many MPA member company films in competition here, highlighting the strong relationship that we have had with this festival for so many years.

When Venice in full swing, it tells me that our whole industry is on the path to recovery, and that our strong relationship, not only with the festival, not only with Italy, but all of Europe, and indeed the world, continues as strongly as ever.

As you may know, this year marks the 100th anniversary of the Motion Picture Association, an occasion for us to look back with pride at so many achievements, including keeping this industry free of censorship, preserving the rights and freedoms of creators, fighting piracy, and working to keep markets open and competitive.

But like Janus, the Roman god whose two heads looked backward and forward, our anniversary has also compelled us to look to the next century.

It is no secret that we have come through one of the worst periods in our economic history, and we are still struggling in many corners, but there is at least one certainty on which we can always depend: that this industry is a global powerhouse, that will always generate jobs and economic vibrancy, if we just give it the freedom it needs.

And one of our greatest assets in that regard is – and always has been – our willingness to work together, across the ocean, towards the same goals.

It has always been that way, since the earliest days of this industry. Italy, in fact, was the first place in Europe to serve as the location for a major American studio production.

In the summer of 1914, Famous Players, the company that later became Paramount Pictures, boarded an ocean liner to Rome to shoot the 1915 silent movie The Eternal City. It was interrupted by the outbreak of war. But our connections remained strong.

Decades later, after the second world war, as Europe was raising itself, literally, from the ashes and rubble of conflict, the 1953 Paramount film Roman Holiday was shot at Cinecittà studios.

It was a rallying call for Americans and others to return to Europe, and fill the continent, once again, with their tourist trade, with their business, and in the spirit of virtually every movie that hits the heart, with romance.

The film made the Vespa an icon of post-war life. By 1962, more than 60 movies featured Vespas, and by 1970 Piaggio had sold more than four million Vespas worldwide. And very recently, the same Vespa that Audrey Hepburn rode on, sold at auction for more than a quarter million dollars.

Two factors contributing to this industry’s economic growth are its ability to leverage massive investments as well as the capacity to market content to large domestic audiences.

I mention this to make two points.

First of all, our industry has always thrived and continues to generate jobs and growth.

Right now, it has a global turnover of around €540 billion. And Europe is the third largest film and audiovisual sector in the world, accounting for approximately €121.7 billion of that figure, and generating two million jobs across the region – one million directly attributed to development, production and distribution, and another million that are indirect.

Our member studios are active players in that growth, in Europe and around the world.

In the U.K. for instance, Walt Disney has spent billions on productions since 2018, directly supporting over 30,000 jobs in the country, including 19 features from the Lion King to Cruella, 16 series for TV and streaming platforms such as Marvel’s Moon Knight and Lucasfilm’s Willow, seven original productions for Disney + and 50 National Geographic shows

Italy remains a popular destination for international film and TV production, due to its COVID safety measures, its attractive rebate, and of course, its amazing locations. Our member studios have continued greatly to local economies across the country, including Netflix’s Red Notice, Walt Disney’s The Little Mermaid, Indiana Jones 5, and House of Gucci, and Paramount/Showtime’s Ripley series, to name a few.

Here in Venice, in the year 2020, the movie Mission Impossible 7 brought welcome relief to the city, as the Mayor will remember. The Municipality received half a million euros alone for three days of shooting in the Doge’s Palace and for the Arsenal which the crew used as its production headquarters.

My second point brings me back to those Vespas!

Our industry has what the English call a tremendous “knock-on effect,” and by that, I mean the way our industry generates business around it.

In Northern Ireland, there was a television series you may have heard about called Game of Thrones! In 2018, an estimated 350,000 out-of-state visitors came to the country where it was filmed, specifically because of the TV series, and they spent more than £50 million [pounds] at various attractions round the north coast and Belfast.

And now, from Vespas to Ray Bans!

Paramount’s Top Gun: Maverick is not only about to reach $1.4 billion worldwide, it is generating business for other things. In the United Kingdom, for example, the movie is driving up sales of the high-priced aviator sunglasses that Tom Cruise wears in that movie.

Our industry continues to excite moviegoers the world over, and contribute to the economy. There has been no lack of interest in the stories we create on screens large and small. And as long as we continue to address challenges together, we will go from strength to strength. And if we had a ring ceremony like Venice’s, we would have a very good reason to cast that ring into the ocean of profitability every year!

One of the ways we can do that – and one of the ways we are doing that – is in our work to fight and reduce piracy. It is the single greatest threat to the global audiovisual community. It harms local and foreign films and businesses. It threatens jobs. It undermines investment. It reduces tax contributions to governments.

And it stifles the very creativity that is the heartbeat of our industry.

The MPA is proud to have assembled the Alliance for Creativity and Entertainment – or ACE – the global coalition of our studios and the world’s biggest entertainment companies, including many European partners, such as Canal Plus, BBC Worldwide, Constantin Film, Grupo Globo, and Sky.

We work in close partnership with Europol, Interpol, and a vast network of local law enforcement around the world, and we are making considerable headway with arrests.

We are also taking civil action through the MPA to block pirate sites, using laws that were pioneered in Europe and which are now embraced by dozens of countries around the world. Italy has been particularly strong in this regard, and our partnership with FAPAV has never been stronger

The bottom line is this: Together, we serve, we illuminate, and we grow economies. We are indispensable.

In Ancient Rome, soothsayers used to examine the livers of sacrificed animals to predict the future. Trust me, the science of prediction has not improved very much since! But if there is one thing we can predict, it is that the magic of the theatrical experience will always be with us. We can see that in the resurgence of our member studios after the pandemic.

Paramount’s Top Gun: Maverick is rapidly approaching $1.4 billion worldwide. Universal’s Jurassic: World Dominion, Marvel Studio’s Doctor Strange in the Multiverse of Madness, are closing in on a billion. And Universal’s Minions: The Rise of Gru, and Warner Bros’s The Batman, and Marvel’s Thor: Love and Thunder are not far behind.

And of course, Sony Pictures’ Spider-Man: No Way Home, a colossus in 2021, is closing in on $2 billion, and its Bullet Train just a few weekends in, has already crossed the $100 million mark.

As long as governments around the world support a regulatory and legal environment that protects copyright …. As long as they continue to remain flexible in their policies and allow the industry to adapt and innovate… As long as they encourage inward investment in positive and proportionate ways, we will …

Continue to strengthen economies wherever we do business …

Remain as vibrant, creative, resilient, and inventive as ever …

Provide great entertainment with our stories ….

And sell a lot of sunglasses – even in the winter!

Thank you for listening to me. It is always a great pleasure to be here in Venice, and I hope you enjoy today’s panels, which will be led by our own Stan McCoy, with a title that is as familiar as it is true: