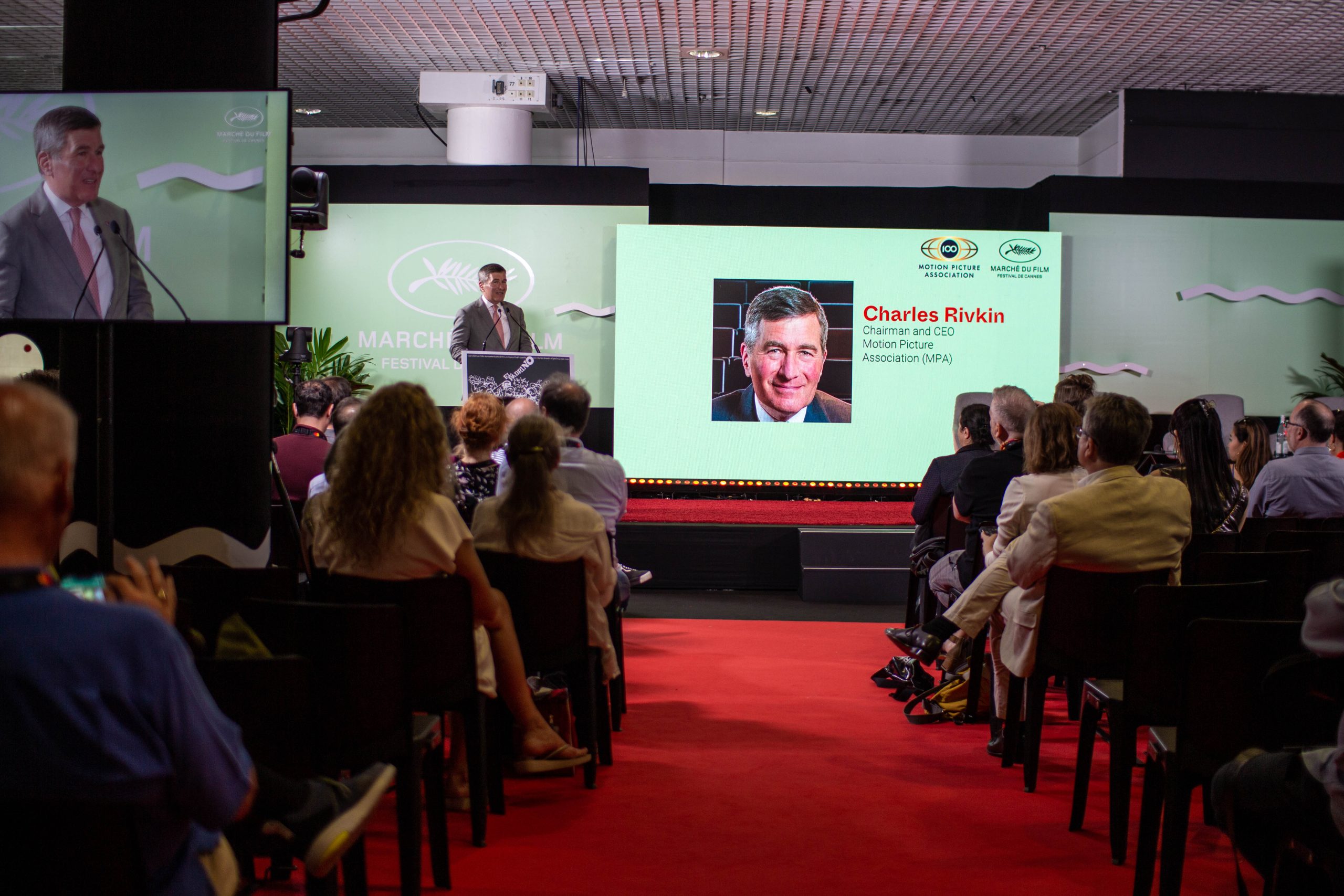 As I just said, great to see Cannes in full swing, which also means our industry is in full swing. And a great deal of that global connectedness is strengthened by the transatlantic partnership that is more than a century old.

It’s good to return to Cannes, where once again, emerging storytellers from around the world can dream about their movies being seen by a wider and responsive audience, and launching their careers … And where the bigger names – many of whom saw their careers launch here – can re-establish their bone fides.

I am also delighted to see a wide representation here of our member studios and other American studios and productions. Two of our most famous Toms will be here for major world premieres: Tom Cruise leading the festivities for Paramount Pictures’ Top Gun: Maverick, and Tom Hanks sharing the honors for Warner Bros.’s Elvis.

Universal Pictures is also here thanks to the Focus Features film Armageddon Time, directed by James Gray, which is in competition. Also in competition is A24’s Showing Up by Kelly Reichardt.

And Beast, which marks a shared directorial debut for Riley Keough and Gina Gammell, will be part of Un Certain Regard.

While we rightly recognize the history that has bound us for more than a century, I would also like to emphasize the other element of our theme today: a new era of growth and innovation. I believe that both these elements are mutually complementary because the strength of our partnership is critical to the success of our future. And a large part of that is embracing change together.

Thanks in part to the presence of Andrea Kalas, Paramount’s Senior Vice President of Archives, on the roundtable today, I am reminded of a particularly apropos story about Marcel Pagnol.

Now, Pagnol, as many of you know, was the great French playwright and filmmaker whose debut film in 1931 was an adaptation of his own play, Marius. And it was produced by Paramount. In a 1973 documentary, he recounted how he received extremely hostile criticism, for daring to reframe a great play into what many considered such a vulgar art form.

According to Pagnol, he never forgot what one magazine writer wrote about him. After all those years, he could still quote it verbatim: “With his shabby flesh and his long face,” the article said, “This sly trickster never interested anyone except advertising salesmen. He looks like an anemic anteater who’s been stripped to the bone by red ants.”

Now, that is some colorful language!

The ones who perceived Pagnol to be destroying the very foundations of respectable art soon found themselves on the wrong side of history.

Pagnol would later be lionized by the next generation of filmmakers – the Truffauts, the Rohmers, and the Godards – for taking that first bold step and embracing the future. And Paramount was there with him for his very first film.

From the very beginning, our industry has worked closely together, not only in terms of shared productions and resources, but shared values.

On both sides of the Atlantic, we have always been committed to freedom of speech and freedom of expression, as the necessary foundation for our industry to thrive.

As I’m sure the French historian Olivier Loubes, who sits on today’s panel, will tell you: The Cannes Festival was conceived on the eve of World War II by the French government, with considerable support from our industry, as well as the British government and others, to raise the flag of freedom of speech and freedom of expression, free of fascist intervention.

Sadly, as you will hear, war came before art.

At the end of the war, the 81-year-old Louis Lumiere wrote to my predecessor, Will Hays, on the eve of Hays’ retirement from the MPA.

“Allow me to hope to have the pleasure of seeing you again soon in France,” he wrote, adding that the “terrible years through which we have just passed … have affirmed the great friendship uniting our two countries.”

After the war, as Europe was raising itself, literally, from the ashes and rubble of conflict, the 1953 Paramount film Roman Holiday, was a clarion call for a different kind of freedom … For Americans and others to return to Europe, and fill the continent, once again, with their tourist trade, with their business, and in the spirit of virtually every movie that hits the heart, with romance.

While the challenges of the pandemic are not the same as the human tragedies of that war, we came through, once again, together.

Last year, I had the opportunity to address European exhibitors and their national associations at CineEurope, where I told them our unity and shared purpose, once again, were the key factors.

The film and television industry, and governments across Europe, teamed up to keep our workers solvent when the pandemic ground productions down to a halt.

They also worked together to spur a wider economic recovery, especially by creating desirable jobs for a major part of the economy that needs employment: young people. And thanks to the sheer resiliency and initiative of European filmmakers and distributors, Europe suffered far less of a drop in earnings, admissions, and productions than many other regions.

We have always recognized that, despite national borders, our industry works and lives in a shared space, with shared values and interests, and that we will thrive and continue to be important economic drivers in our respective economies, when we stand together to meet challenges.

Since the earliest days of cinema, we have always worked for strong copyright protection and enforcement … To fight those who would take the hard work of creators and exploit it without compensating them.

I believe Andrea Kalas, whom I mentioned earlier, has been looking into the history of the MPA and discovered that our earliest working groups were well aware of this need for protection of content at a global level. So, this goes far back!

As I recently told international exhibitors gathered at a conference in Las Vegas, piracy is one of the most formidable challenges we face now and into the future. It has become a global threat with illegal websites and streaming subscription services run by operators all around the world.

The MPA is proud to have assembled the Alliance for Creativity and Entertainment – or ACE – which is a global coalition of our studios and the world’s biggest entertainment companies, including many European partners, such as Canal Plus, BBC Worldwide, Constantin Film, Grupo Globo, and Sky.

We work in close partnership with Europol, Interpol, and a vast network of local law enforcement around the world, and we are making considerable headway with arrests. And we are also taking civil action through the MPA to block pirate sites, using laws that were pioneered in Europe and which are now embraced by dozens of countries around the world.

When the rule of law applies equally to the online and the offline world, our industry can be fully protected.  That’s the vision that drove the entire audiovisual sector to work so closely together to strengthen the Digital Services Act – which is nearing its finalization at the European level.

The DSA will not deliver everything we wanted, but with persistence and continued solidarity, we will achieve our shared vision for rule of law in the online environment.

You can be sure of it.  If you doubt it, just think about all we have achieved and all we have overcome together over the past century.

I am looking forward to today’s discussion, as we not only commemorate our years together, but look forward to the ones ahead … to a world in which theatricality and streaming and the internet are increasingly part of the shared content space.

As I look around, I see an industry doing all the right things to embrace the future and evolve. As we speak, for example, Cannes has for the first time invited TikTok as a sponsor, as well as Brut, the rising digital media startup, to connect with new generations. And our member studios and many streaming giants continue to work together with European partners in film and television.

I believe, our unity is the passport to the future. And I am reminded of something that Jean Cocteau, who was head of the Cannes jury three different times, once said. The Cannes Festival, he said, “is an apolitical no-man’s-land, a microcosm of what the world would be like if people could contact each other directly and speak the same language.”

We have been working together and speaking the same language for a long time. May we continue to find ways to do that for as long as possible.

Thank you. And now let me hand over to my friend Julien Marcel, CEO of Boxoffice magazine.