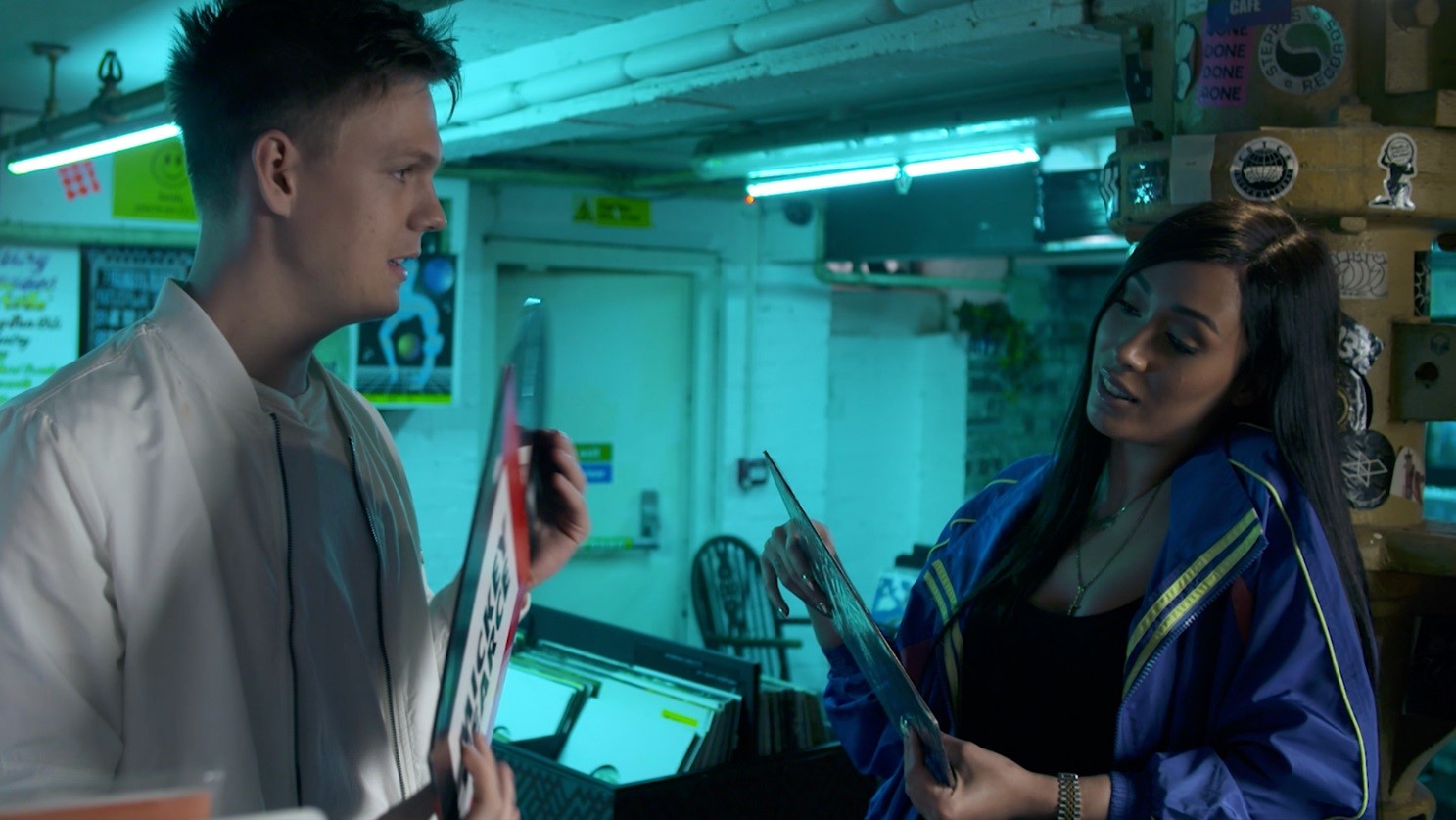 Get It Right (From A Genuine Site) – the consumer education initiative that engages fans in new and exciting ways to encourage them to value the creative process and to access content legally – is moving to its next phase.  This follows in-depth research, including focus groups, with the target audience of 16-24 year olds.

The creative industries campaign, which is also backed and funded by Government, is launching a new video on the Get It Right YouTube Channel on 14th August with the support of leading social influencers.

Starring leading content creator Caspar Lee – who has 10 million followers across his social channels – and its influencer host, Snoochie Shy, the video continues the key aim of encouraging consumers to take time to identify and access genuine and licensed sources of content so that the volume of copyrighted material being accessed, streamed and shared without permission can be reduced. The emphasis is on reminding the audience that creating and delivering the content they love depends on a great many people who make this process possible; and that making the right decisions about sourcing content legally will also support the career pathways of future generations looking to work in the creative industries.

Led jointly by the MPA (Motion Picture Association), representing major producers of film, TV and screen-based content, in partnership with UK record labels association the BPI (British Phonographic Industry) as part of a Creative Content UK (CCUK) content protection programme, Get It Right draws on the broad support of the wider creative industries, including also gaming, media, book and magazine publishing, sports and other live event broadcasting and other entertainment sectors.

Nigel Adams, Minister for Sport, Media and the Creative Industries, said: “We need to have the right environment where UK creative firms receive the value of their amazing content so that they can produce more of it.  Our Creative Industries Sector Deal committed to strengthening intellectual property rights by bringing industry together to tackle online piracy, including through our £2 million investment in the Get it Right campaign.”

We all love many types of content – with some of us passionate about particular types and genres. So, hosted by Snoochie in a mix of South London locations that take in a video arcade and an independent record store, Caspar is quizzed about the content that he loves – the music, film/TV and games that have inspired him, and his most recent purchases. These include Lewis Capaldi’s chart-topping debut album Divinely Uninspired to a Hellish Extent (which we discover took 390 hours to record, employing over 50 people who have been working on it creatively since 2017) – and James Cameron’s epic Titanic movie  (where more than 20,000 people were involved in making the film over almost 2000 calendar days).  Other picks include Mickey Pearce’s 12” Don’t Ask, Don’t Get and the real-time strategy game Age of Empires II.

We also learn that Caspar has first-hand experience of the true cost of piracy. Laid in America, the smash hit in which he co-starred with fellow YouTuber KSI, became one of the most pirated films ever soon after its release in September 2016.  In one month alone it was illegally streamed or downloaded more than 500,000 times. Sadly for Caspar and his millions of fans, and for all the people involved in making the film – those in front of, behind and in the community around the camera and the sets – this extreme level of piracy meant that the opportunity of a sequel was not progressed, resulting in the loss of potential jobs, lost opportunity for the development of new technical skills and therefore less of the content choice that we all love to have.

Creator, Caspar Lee, said: “The Get It Right campaign is raising awareness of a key issue that so many of us are just not thinking about. When we don’t get content the right way, it makes it so much more difficult to make more of it. When our movie, “Laid in America” came out, it was one of the most illegally downloaded films at the time. It’s unfortunate because it affects every person who is involved, from the set designers to the caterers to the extras, when content is not sourced from genuine sites. It’s important to support the industry as a whole, so everyone involved can continue to make the content we all love and want more of.”

The Caspar and Snoochie two and a half minute video will be supported by a digital advertising and influencer campaign, which, like previous Get it Right materials, will be carefully tracked to see how it resonates with the target audience. Once evaluated, CCUK will look to commission further short-form video content as part of a mini-series that will continue to share the stories and passions of high profile influencers and creators around their love of content. It will continue to emphasise the significant human resource, skill levels and time that goes into the overall creative process. The first video is being produced for CCUK by MSL – the global public relations and integrated communications company.

Marianne Grant, who co-leads on the campaign for the MPA, said: “When people are exposed to the videos and other materials offered by Get it Right, they have been more willing to consider how they may, personally, make changes in their behaviour and choose to access the music, film, TV, published, games, sports and other content that they love from genuine sources. That requires taking time to check – and not just follow whatever links are offered – and to discuss with friends and family that they should do likewise.

“Since Get it Right was launched, more people are taking that time, with the almost 30 per cent of the population who have been exposed to Get it Right materials reducing significantly their use of infringing content. Our task now is to reach further into the population with these interesting and important messages – to provide more engaging and informative content to improve people’s understanding about the creative process and all the people who are involved in it – and to encourage further change.”

Since its launch in 2016 Get It Right has engaged with Millennials and younger consumers in particular – the groups that tend to infringe the most – around their love of content.  Rather than focusing on a message of possible legal sanctions, which have their place in reducing piracy but, by themselves, may not always change behaviours, Get It Right has instead sought to reduce content infringement by connecting with these groups more closely on their own terms and in the places where they are already enjoying content.  Fresh initiatives, such as collaborations with urban online youth broadcaster SBTV, an artist-led campaign that highlighted the amount of time that goes into creating content, and street art projects reflecting local creativity in cities around the UK, have enabled Get It Right to ‘use the language’ and draw on the cultural references that matter most to these groups.  More recently this has been backed up by an 18-month educational email campaign in partnership with the main Internet Service Providers (ISPs) – advising users whenever their connections have been used to share content illegally and pointing them instead to the wide range of legally available sources.

The combined effects of these various campaign strands appear to be making their mark, with research commissioned by CCUK during and after the first phase indicating that Get it Right and its core positive-focused anti-piracy message has reached nearly a third (almost 30%) of the UK 16-50 year old population. The next phase of the campaign is focused on delivering this message to more people in this important target audience – and on emphasising that each person who is exposed to the campaign can, personally, make an impact if s/he chooses to remember the many people who are involved in imagining, creating, making and distributing any piece of recorded, live broadcast, streamed or downloaded online content. We just want them to remember to #GetItRight.

Ian Moss, BPI Director of Public Affairs and co-director of CCUK, added: “It’s encouraging to see Get It Right quietly but surely having a positive effect, and that its core message is getting through. Fans have a clear choice – If they value the creative process, and access content legally from licensed sources, creators will be able to invest more of their time and creativity into producing the music, film and other entertainment we love. If they don’t, and creators feel less able to take risks and invest, this rich choice will diminish for us all.”

The creative industries generate over 200,000 new jobs each year and contribute more than £101.5 billion into the UK economy annually – a figure which, according to DCMS data for 2017, rises to £268 billion if you include the wider digital, culture, media and sports sectors that take in film, TV, radio, photography, music, advertising, museums, galleries and the digital creative industries.  The Creative Industries Federation has reported that the industry was responsible for 1 in 11 UK jobs in 2016 – 87 per cent of which are at low or no risk of automation – and that in 2018 the total number of jobs grew by 1.6 per cent, compared to the UK-wide employment increase of 0.8 per cent.  Furthermore, the Creative Industries Federation reminds us that between 2011 and 2018, creative industries employment mushroomed by 30.6 per cent (compared to the UK average growth of 10.1 per cent during that period).

To support this world-leading creative content sector, Get it Right reminds consumers that they must understand the need to access the music, film/TV, books and magazines, games, sports, other live broadcast and other entertainment content they love in the right way and from the plentiful supply of genuine sources.  By doing so, the jobs “engine” will continue to strengthen its power and “4th Industrial Revolution” jobs, that will be so critical to the next generations, will be created and sustained.

About Get it Right from a Genuine Site

Launched in October 2015 with Government backing and also funded by the creative sector, Get it Right from a Genuine Site is an initiative working to promote increased awareness and respect of the value of the UK’s creative industries.

The campaign champions the many different sides of the UK’s creative industries, including music, television, film, book and magazine publishing, sports, gaming and photography.