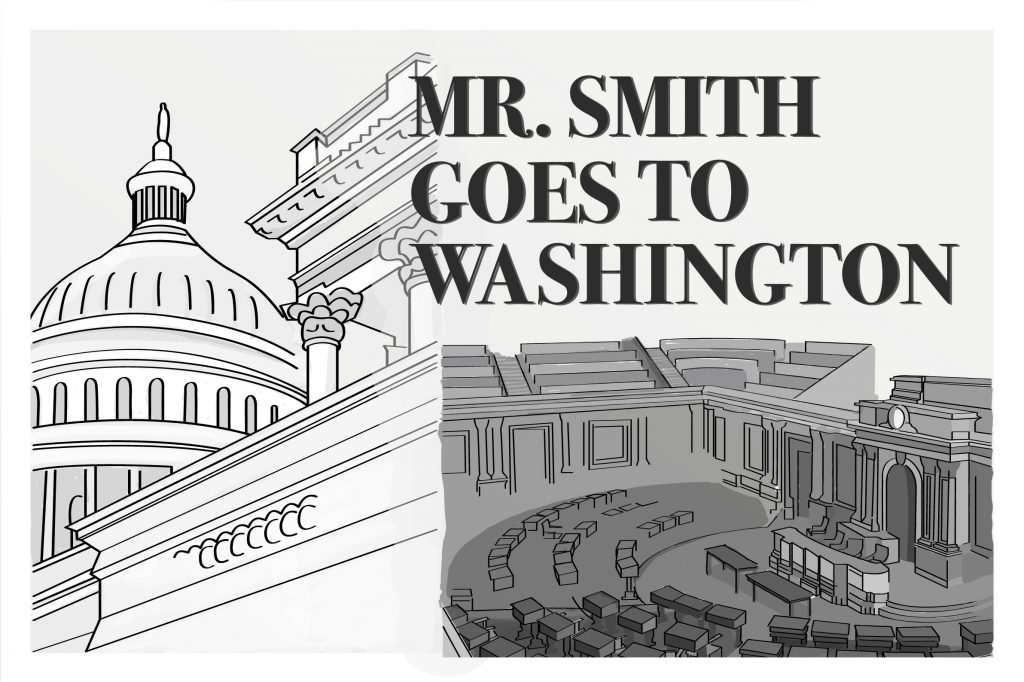 Mr. Smith Goes to Washington is American dramatic film released in 1939 by director Frank Capra that angered the political establishment but won wide acclaim from the public and film industry.

The story concerns Jefferson Smith (played by James Stewart), a hokey, idealistic youth leader who is appointed to the U.S. Senate by his state’s political authorities on the assumption that he will be a pliable stooge. However, when he proposes a national youth camp on the site of a crooked land deal he was expected to approve, his benefactors—as well as the state’s senior senator (Claude Rains)—turn against him. Disillusioned by the corruption of Washington, Smith nearly leaves town but is persuaded by his secretary (Jean Arthur) to mount an impassioned challenge to the system in the form of a marathon filibuster…

Adapted from The Gentleman from Montana, an unpublished short story by Lewis R. Foster, Mr Smith goes to Washington was conceived by Capra as a sequel to Mr Deeds Goes to Town, which was released to great success in the United States and Europe in 1938. It was the second collaboration between Capra and James Stewart, after You Can’t Take it with You (1938) and before his iconic role in It’s a Wonderful Life (1946).

While the film sharply criticizes the American institutions, it must be understood above all as an ode to freedom of expression and democracy, whose pureness Jefferson Smith tasks himself with saving from the wheeling and dealing of heinous senators. The character’s unflinching nationalism, along with his attachment to the spirit of the Founding Fathers and the Constitution, create a film which, far from strongly attacking the American institutions, attempts on the contrary to underline the necessity of fighting for their proper functioning, both democratically and for the good of the people. This grandeur about American democracy, highlighted time and again throughout the film, is framed against the Fascist regimes proliferating Europe. The United States is thus portrayed as the standard bearer of liberty, in line with the myth of Manifest Destiny.

What did the critics say?

“Mr. Smith Goes to Washington” is typically Capra, punchy, human and absorbing-a drama that combines timeliness with current topical interest and a patriotic flavor blended masterfully into the composite whole to provide one of the finest and consistently interesting dramas of the season. Picture is a cinch for top grosses in the key runs, with hold­overs the rule rather than exception.

(…) Capra focuses attention on Washington as the symbol of liberty and democracy of the United States. Presentation is in a sincere vein, with no direct attempt at a preachment. But the patriotic appeal is there, forcefully, albeit secondary to the main dramatic thread, and will command attention from everyone who witnesses the picture.

What will you say?

Interested in seeing Mr Smith Goes To Washington as it would have been showcased in 1939? Head to Cannes 39 festival in Orleans this 12-17 November.